He earned High Scoring Hanoverian at his 100 day Test in 2004, and was winner of the American Hanoverian Society Licensing, West Coast, as well as winner of multiple in-hand and under saddle classes.

Devon Heir is sired by De Niro, who is a son of the legendary Donnerhall – perhaps one of the most successful dressage stallions of all time. De Niro has multiple licensed sons and his foals have topped Elite Hanoverian Foal Auctions. Devon Heir’s dam is also sired by a dressage legend, Rubinstein I, who sired 66+ approved stallions and was himself a successful Grand Prix competitor having been a member on the 1996 Olympic Team.

View more images of Devon Heir below, including live performances approximately 3 minutes into the video. 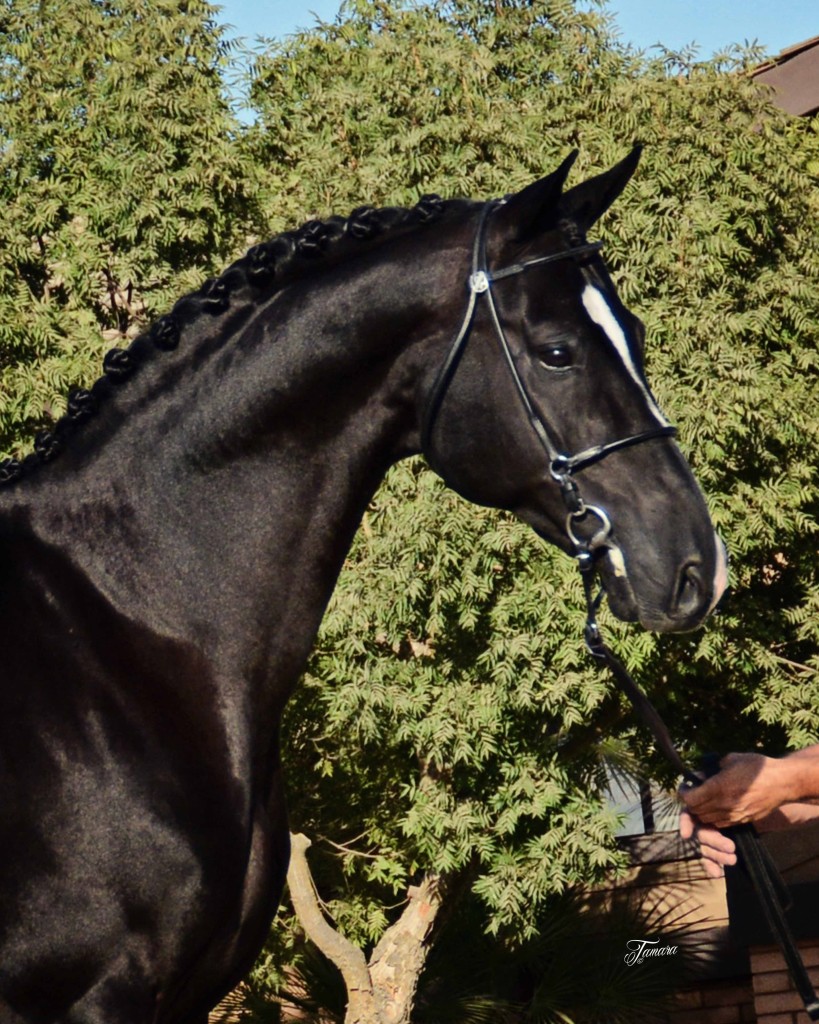 In 2005, Devon Heir was USDF/Cosequin Series West Coast Champion Mature Stallion, and he tied for 2nd place Nationally as USDF/Cosequin HOY. He continued his winning ways in 2006 earning the USDF Breeders Championship Grand Champion Stallion Nationwide. In 2009, Devon Heir won nearly every under-saddle class he entered with scores in the 70’s, and was Grand Champion Fourth level horse at Pebble Beach. In 2010, Devon Heir competed in the Young Rider division. Devon Heir competed successfully at the Prix St. Georges level, qualifying for the Young Rider National Championships in Lexington, Kentucky. Devon Heir was ranked 1st in the US with the American Hanoverian Society for Young Riders at the Prix St. Georges level for 2010.

Devon Heir is approved for breeding with the American Hanoverian Society, Oldenburg (GOV), Oldenburg (ISR) and KWPN Reg. A. He is of modern type, with lovely conformation and three correct gaits that are fluid, rhythmic with great suspension and expression.

Visit his Facebook page to see photos of offspring.

Devon Heir is producing dark, refined foals with beautiful appearances, correct conformation, outstanding temperaments, and spectacular movement that have earned Premium awards at their inspections. He has produced numerous champion offspring for the show ring. In 2009, his daughter, Dazzling Winter, a yearling, won the California Dressage Society (CDS) Sport Horse Breeding Championships held at Rancho Murieta with the highest score of the entire championship show, 83.7%. Also in 2009, another daughter, Donata, tied for second in the US with the fillies, in the ISR Oldenburg Registry Foal Championships receiving an 8.6; and his son Dubai, tied for third with the colts with an 8.7. In 2010, his daughter Danika, was the 4-year-old CDS Futurity Champion at training level. In 2011, the Devon Heir son, Bonameer DG, qualified, competed and placed in, the US National Young Horse 5 year old Championships held in Chicago, under rider Stephanie Hamar.